When should you take out your alfalfa stand?

When weighing your options about when to rotate out of an alfalfa stand, the best advice is usually to quit while you’re ahead. Stand decline in alfalfa is inevitable; the tricky part will be discerning the point in the stand’s aging when you reach your threshold of profitability (ideally you’d rotate out before reaching this threshold). An older stand generates fewer stems per plant, as the crown is more likely to have suffered winter injury or disease or stress from wheel traffic. It’s safe to make the generalization that you maximize profitability by rotating out of the stand after the third year.

In any case, it’s better to act sooner, while you have more flexibility and less danger of a feed shortage. Alfalfa is an adaptable crop and can produce a high yield over a range of stand densities. Stem growth can compensate for stand thinning to an extent. But how will you know when to rotate out of alfalfa? (Which you will likely want to do when you reseed, as alfalfa autotoxicity will prevent adequate germination of new alfalfa in the field for months to come.)

When in doubt, get down in the dirt to take a look

Evaluate your stand in the spring or early fall, at a height of about 4-6 inches. In third-year alfalfa, you should have 3-4 plants per square foot or 25-30 stems to predict an optimal yield. These ranges were observed by Marisol Berti at North Dakota State University to provide the ideal alfalfa yield. Stems are a more accurate gauge of productivity than plants, as stem number can vary over time.

Sample different areas of the field and average your results. You should also dig roots from different areas of the field to check for disease. Dig up the crown and at least 6 inches of the root. Cut the root and crown in half lengthwise. Discoloration should be minimal on healthy plants, and lateral roots should have plenty of nodulation. If you fall somewhere on the borderline in your plant and stem population, your health evaluation may make your decision about whether to keep the stand another year. If root diseases are prevalent in the field, stand decline will happen quickly, but those warning signs and indicators of future productivity will be largely invisible without checking for root damage. Individual plants with severe damage (greater than 50%) will be unlikely to last another year.

Stem count is a good predictor of yield in the current year, and root evaluation gives better clues to the stand’s overall longevity.

Yield potential plateaus at about 50 stems per square foot. After this point, you don’t gain additional yield from more stems as they begin to crowd and compete with one another. So more is not necessarily better – it’s more about finding that sweet spot range of density for best performance.

Aside from the productivity decline, consider other advantages of replacing the aging stand. Keeping the field in production only when there is a thicker stand means the alfalfa is properly competitive with weeds and less herbicide is needed to maintain high quality, high yielding forage. This is lower input cost for a higher output. 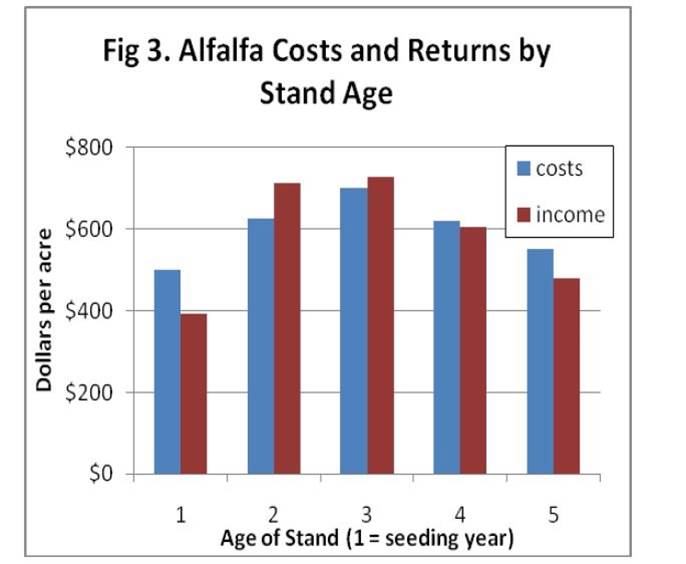 Also, plowing down or spraying/killing a denser stand has rotational benefits, with more N credits and organic matter. These nitrogen credits apply not only to the following year, but will be released over the next 3-4 years as the plant material decomposes, with the release decreasing each year. After the second year, roughly half of the nitrogen credits will still be available to a corn crop. Decomposing organic matter feeds microbes as well, and the rotation effect of 2-3 years of alfalfa greatly reduces the need for insecticides and herbicides in the following crop (corn is the traditional standard, but there are many other summer annual options).

The average N credit to corn from a decent stand of alfalfa is 100 lbs/A in the first year. With the yield boost to corn of about 10-15% percent from the legume green manure along with the cost savings in nitrogen fertilizer (there will be little need for fertilizer except for starter), that’s a gain of about $100/A. You’re also overcoming the inherent losses from planting corn after corn (about $10/acre). That goes a long way toward paying for forage establishment costs, and certainly looks good compared to trying to squeeze another year out of a declining alfalfa field.

You’re getting additional rotation benefit just from breaking up your cycle sooner with a completely new crop. If it’s an annual row crop like corn or sorghum (contrasted with the perennial afalfa), that presents an array of challenges to the weeds and pests settling down in that field. A longer, more complex rotation extends those challenges even more.

What extends the life of the stand you do have? Proper soil and weather conditions are a big part. Proper fertility and drainage helps the alfalfa thrive, as does an extended period of cool, dry fall weather, without much sudden cold, helping the plants harden off before winter. Good management is also key. A more aggressive cutting schedule, for example four cuts for the year instead of the average three, leaves the plants more vulnerable to winterkill and stand thinning. It’s important to remember that you won’t ultimately save your stand, and it’s better to invest in a new one before, not after, you take a loss.

As you prepare to reseed, consider a higher seeding rate. Depending on soil fertility and available moisture, increasing the rate up to 35 lbs/A should yield advantages in the years to come in stand density and competition with weeds.