Cover Crops – For More than Winter

What can cover crops do for you? 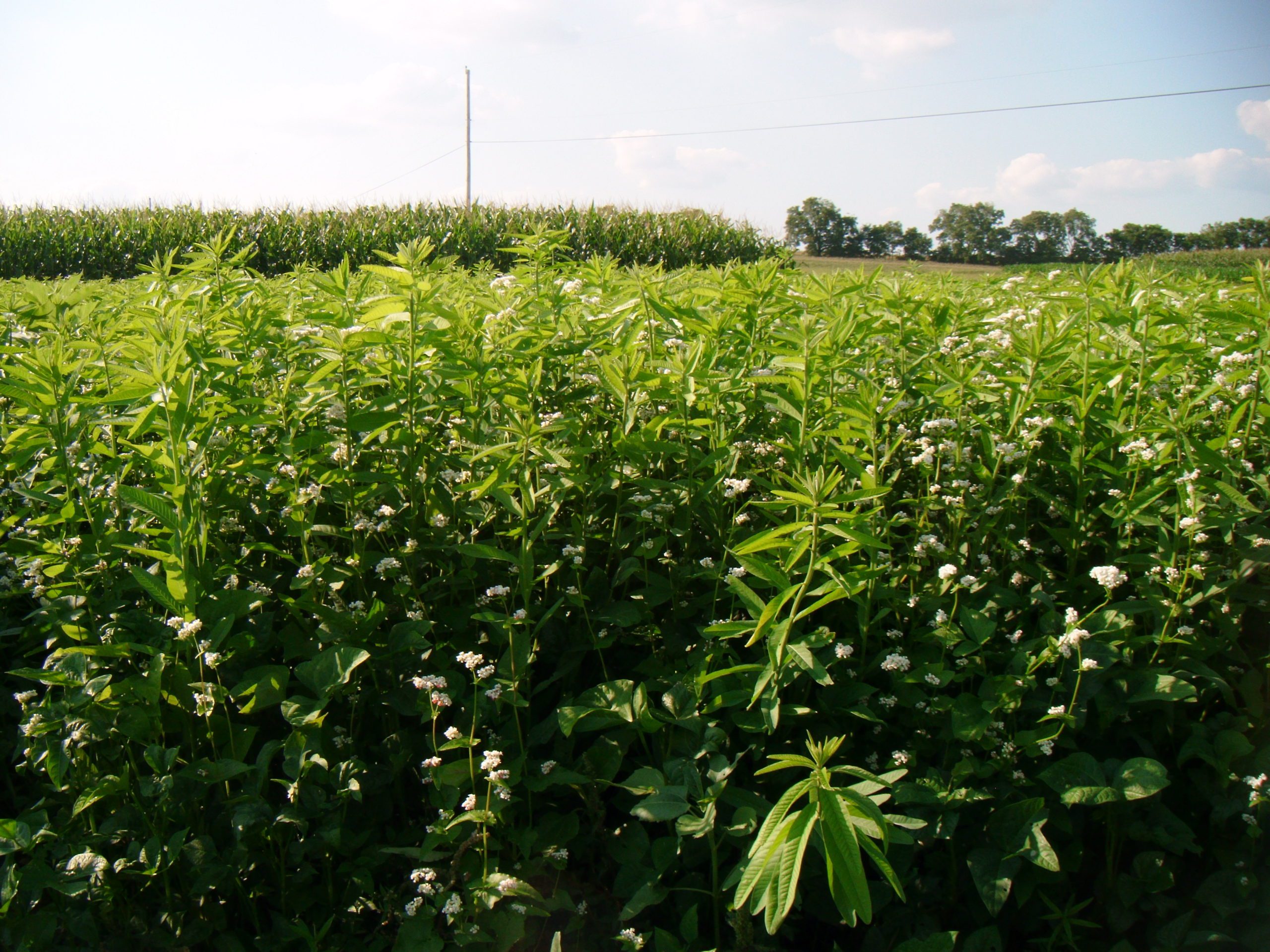 Cover crops are most commonly thought of as a way to protect and rejuvenate soils during winter, providing a buffer against the elements during long harsh months. A cover crop during the summer is equally important – but soil coverage is often less a consideration than nutrient cycling, getting ahead of weeds, and diversity in crop rotation. It’s a shosrter window, but provides far more growth potential.

Cover crops add organic matter, which improves soil by building tilth, stability, and water-holding capacity. This increases soil permeability, reduces soil crusting problems that can be common with heat and drought, and by keeping the surface covered during high rainfall periods, alleviates problems with erosion and runoff.

Nitrogen that you’ve likely invested time and money to get in the ground is extremely mobile in soil. For this reason, N cycling is important year round, and a summer cover crop closes gaps in the rotation for uptake of excess N (by non-leguminous crops such as summer annual grasses), or fixation of nitrogen (legumes contribute 60-100 lbs/A of N, about half of which will be available to the following crop over time). If N is released at a time that does not match the current crop’s need, it can be lost to leaching. If a legume crop is left to grow longer, it not only fixes more N and produces more biomass, but also takes longer to decompose after it’s killed, and the greater carbon content it develops means a slower release of N. That slower release often works in your favor.

Cover crop species work well alone but often provide more benefits and added balance in simple combinations. For example, each species may have slightly different chemical weed suppression abilities – known as allelopathy, or the ability to secrete chemicals that temporarily inhibit germination of other species. This potentially creates a broader spectrum of weed control, with each species’ allelopathy against slightly different crops. Mixes of legumes and non-legumes also encourage greater nitrogen fixation as a result of natural competition. Non-legumes take up soil N as they establish their roots, and legumes establish more nodules and fix more soil N in a more nitrogen-depleted soil environment, so a healthy mix of these types of cover crops helps maximize total N production.

Ray’s Crazy Mix was a cover crop mix created by King’s in 2014 for a North Carolina grower to combine several valuable species characteristics in an innovative, quick-growing, and versatile mix. This mix is being evaluated in several research plots in North Carolina, as well as in Lancaster, PA.
Grazing Cover Crops

Most cover crop species can double as pasture – but use a higher seeding rate. Some are more desirable than others for grazing. Buckwheat, for example, does not often make a good forage, since its effective fiber and other nutritional qualities are low, while sunn hemp quickly becomes too fibrous to make a useful forage.

If a strictly cover crop use is desired, the crop can be plowed under, chemically killed, or mechanically killed. Mechanical kill methods include no-till rolling and crimping, leaving a dead mulch for planting into, and flail mowing, which creates a finely chopped mulch of the crop on the soil surface. Either works well for short-term weed suppression as the next crop gets established. If you aren’t preparing for a fall planting, the summer cover can be left in the ground, providing a winter-killed residue for ease of no-till planting early in the spring. It will hold on to N and some nutrients in the residue, but not as effectively as a living cover might.

After a spring small grain harvest, you may find that you have no plans for that field until fall planting, but still want to find a beneficial and productive use for the acreage. After the winter crops have come off, nutrients and beneficial organisms linger in the soil. Both should be held in place to benefit the next crop. A living crop with a dense, living root system helps this happen. The roots also break up compacted soils, and many root structures reach surprisingly deep.  Whether they are tap roots or branching, root structures bring up key nutrients, store them in their tissues, and make them available as they decompose.  Summer cover crops can contribute to weed suppression as well by breaking up weed lifecycles in between two crop growing windows. The same holds true for pests other than weeds. Summer annuals are also well known to be the quickest biomass producers.

Many summer cover crops can grow several tons of dry matter in two or three months, providing their diverse benefits in a short time. All of these help build soil organic matter quickly and add diversity to the rotation. Here’s a brief look at some individual species and their unique payoffs.

Excellent scavenger of nitrogen and other nutrients, including calcium, sulfur and magnesium. Large, dense broadleaves provide excellent weed suppression. As a forage, highly digestible and high in protein, excellent companion for warm-loving grasses like sorghum-sudan. Turnip varieties have bulbs. Plant at 4-5 lbs/A.

A quick-growing “smother crop” to outcompete weeds and improve soil, buckwheat does well on poor soil. When planted after tillage, it can weaken perennial weeds. It grows to maturity quickly, and blooms in three weeks for up to ten weeks, attracting beneficial insects. Easily killed/incorporated for the next crop. Biomass is succulent and also easy to no-till plant into, and decomposes quickly. Buckwheat is not recommended as a forage. It also reseeds itself quickly, with the potential to become a weed in the next crop, though it is easy to kill. Plant at 60 lbs/A.

Productive heat adaptive legume with a vining growth habit. Excellent drought resistance combined with good tolerance of heat, low fertility and a range of soils; if left to bloom, flowers attract many beneficial insects that prey on other pests. Used as forage, it provides high digestibility and protein. Maximum biomass is produced in 60 to 90 days, and if incorporated, decomposes quickly in soil. Drill at 40 lbs/A.

BMR tillering corn, provides excellent grazing component, with highly digestible fiber. As a cover crop, it is a high biomass producer.  Works well in combination with warm season legumes like cowpeas or soybeans, or with brassicas.

Adds organic matter to worn-out soils. Fast growing for erosion control, heat loving, smothers weeds, suppresses nematodes, penetrates compacted subsoil. Roots scavenge nutrients.  Most of our sorghum-sudans are BMR, providing excellent digestibility for grazing applications. If strictly cover crop application is desired, our non-BMR Quickcover Sorghum-Sudan may be the more economical choice. If left standing into the winter, sorghum sudan will kill with frost and provide a cover all winter, with easy planting into the dead residue (or after tillage) the following spring. Plant at 35 lbs/A.

Summer annual legume cover crop. Fixes nitrogen, establishes quickly, and competes well with weeds. Most of the roots are in the top 8 inches of the soil, with tap roots growing deeper. Adapted to variable soil types. Should be drilled at 60-100 lbs/A.

Tall-growing summer annual legume. Sunn hemp tolerates hot, dry conditions well. Use as a green manure/cover crop to provide both organic matter and fix nitrogen during the period between the summer and winter cash crop. Sunn hemp produces significant biomass in 6-7 weeks, with the potential to reach heights as tall as 9 feet. Plants remain fairly succulent for about 8 weeks after seeding. It has a deep tap root with many lateral branches. Not recommended for grazing; becomes tough and fibrous early in maturity. Plant at 20-40 lbs/A.